Dungeons and Dragons Online has the same concept of Abilities as the tabletop version of Dungeons & Dragons.

There are 6 ability scores that are the basic building blocks of your character. These help define the strength of your character? How smart? How quick? These are represented in the game by your ability scores. If your Strength is high, you will have a much easier time breaking down doors and bashing monsters in the head than if your Strength is low—you can still attempt anything you like, but your ability scores will have a lot to say about how successful you are at the attempt.

Is a character muscle-bound and insightful? Brilliant and charming? Nimble and hardy? Ability Scores define these qualities—a creature’s assets as well as weaknesses.

The three main rolls of the game—the ability check, the saving throw, and the Attack roll—rely on the six Ability Scores.

Each of a characters Abilities has a score, a number that defines the magnitude of that ability. An ability score is not just a measure of innate capabilities, but also encompasses a characters Training and competence in activities related to that ability. To see what your characters abilities scores are, you can press the letter c on the keyboard to bring up the character sheet. 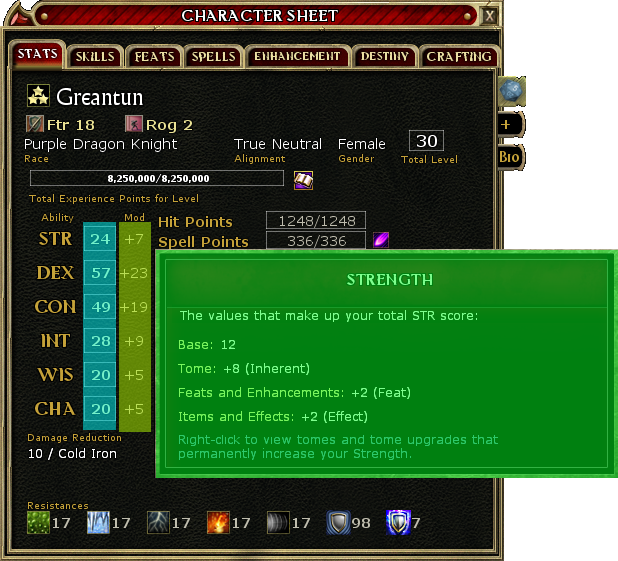 On the character sheet, the abilities scores (highlighted in blue) contain the current values. These can be increased in several ways:

Information about how your character got the score they have is available by placing your mouse over the ability score you want to see, and hovering there. In the above image (highlighted in green), it is showing how strength became 24:

You can see the modifiers on the character sheet (shown above highlighted in yellow).